Of Tapestries and Weavings 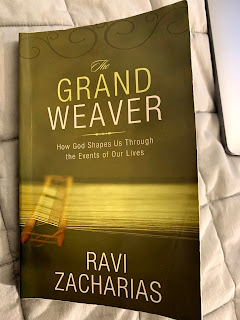 Prior to his first deployment—the one that would ultimately claim his life—my brother stored several boxes of belongings at my older sister's house, including his collection of books.

Knowing our shared affinity for reading, Mark (my brother) told me to help myself to any of the books in his stash while he was overseas. After his death, these books gained added value because they contained his markings and scribbles in the margins. Coveted insights into what he was thinking when conversations could no longer be had.

Among the books Mark left behind was The Grand Weaver by Ravi Zacharius. For those unfamiliar with Ravi Zacharius, he's a Christian apologist who communicated truth with both compassion and zeal. His books and talks have played a huge part in strengthening my faith and shaping my worldview over the years. (You can YouTube him to hear some of his talks and debates.) My older sister asked if she could hang on to Mark's copy of The Grand Weaver for a while, which no one in our family had a problem with. I knew I wanted to read it eventually, but not yet.

Last fall I was booked to do a comedy set at a multi-day event in Colorado. I soon learned that Ravi Zacharius would also be part of the speaker lineup, albeit on a different day and on a different stage. I secretly hoped I might get to meet him in person, but I didn't dare ask for an introduction. (Main speakers often arrive just hours before the start of the event and are understandably given some privacy and space to rest and prepare. Though it may look on the outside like a life of luxury, living on the road is wearying.)

I did, however, drum up the courage to ask the event coordinators if they might be willing to arrange to have him sign my brother's copy of The Grand Weaver. My plan was to sneak it off my sister's shelf and then return it to her signed as a gift. They agreed to do what they could, and fortunately they were able to get the book back to him and Mr. Zacharius graciously signed it. (And they must have filled him in on the history of the book's original owner, because he kindly included a personal note for our family.) I couldn't wait to give it to my sister. "It's okay if I don't meet him in person," I told myself. "This is more than enough."  (But I still didn't open the book past the inscription.)
--------
The morning after the event I woke up before the crack of dawn to catch my flight back to Atlanta. As I waited at the gate with my accordion, I looked around and was shocked to see Ravi Zacharius standing just a few feet away from me. (Apparently he and his assistant were booked on my same flight. What were the odds?!)
I'm one of those people who gets weirdly shy and awkward when I'm around famous people. Avoidance, not confrontation, is my typical MO when I feel intimidated. But in an act of inexplicable boldness, I found myself introducing myself to Mr. Zacharius and thanking him for being willing to sign the book. It meant a great deal to our family, I told him. I chatted for a few minutes with Ravi and his assistant about life and travels and other things I can't remember. As we said our goodbyes to board the plane, I couldn't believe that I not only got to meet him, but also have a normal conversation with him. (Or as normal a conversation as one can have with a world-renowned intellectual when it's 6am and you're carrying an accordion on your back.)

A few months later, it was announced that Ravi Zacharius had been diagnosed with cancer. In May of this year, he passed away. In light of this, I am beyond grateful for the surge of audacity that overcame me that morning. I will treasure that meeting and conversation for the rest of my life. During a season of overwhelming sadness and heartbreak, God reminded me that I was seen and remembered through a "chance" encounter with a long-time role model that I'd quietly wished to meet in person.

This week I decided it was time to read The Grand Weaver. I've reread Ravi's opening note to our family countless times and finally scanned through the pages to see what my brother underlined. At the end of the book, Mark put brackets around a particular sentence, one that almost seemed like a message to my parents from beyond. My brother wasn't a parent and had no obvious reason to single out that observation. (I decided to share a picture, as I'm not sure I could adequately describe it.) 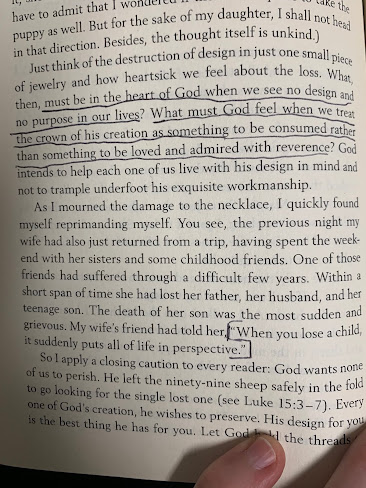 Overwhelmed by the discovery, I sent the picture to my parents, who promptly responded, "yeah we already saw it, your sister sent this same picture to us two years ago." (Not every sentimental revelation has a climactic emotional ending.) But in looking at the history of this book I realized that sometimes a story is in the book, and sometimes, in God's simple and profound grace, the book itself is the story.

Though I didn't pick this book in connection to the Thanksgiving holiday, I've found a renewed sense of gratefulness for the life God has granted me. In the midst of a world filled with chaos and uncertainty, I've been adopted and accepted by a God who is weaving the details of my life into a breathtaking tapestry. Every joy, tear, triumph and heartbreak is a purposeful thread carefully woven into a beautiful picture.

And that, my friends, concludes my yearly contribution to this blog! (Though I'm not writing regularly anywhere right now, I do have a book releasing in February, which you can now preorder here. And if you follow me on social media, I apologize in advance for the incessant amount of posts that are about to happen to promote its release.)

Despite all the craziness I hope you and yours have a wonderful Thanksgiving!