Toddlers and Tiaras (Part One) 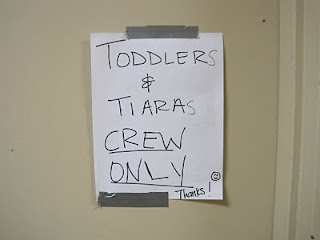 Wow. I don’t even know where to begin…so I’ll start at the very beginning. (Julie Andrews tells me it’s a very good place to start.)

A couple years ago I was flipping through channels and stumbled onto the reality show Toddlers and Tiaras. I’m not usually a reality show person. I’m always skeptical that there is anything “real” about them. But this show caught my attention. There were little girls made up like they were 28 years old and about to head on stage looking like Vegas Showgirls.

Other than Miss America, I didn’t know much about pageants. Homeschoolers aren’t really pageant people. Although, I think it would be fun to see some glitzed-out denim skirts and watch girls walk across the stage trying not to trip on their long hair. We once got a pamphlet in the mail advertising the registration for some Texas pageant.

The most disturbing part of these pageants is the parents (more specifically, the moms) who push them into it. They claimed the pageants boost their girls’ self esteem (I guess it does for the girl who wins the “most beautiful” category. For the other kids…maybe you’ll be prettier next time.) The show is disturbing, but since I couldn’t do anything to stop it, I figured I might as well watch. The more I watched, the more sickeningly hilarious I found it…especially how none of the moms seemed to think there was anything wrong with these pageants.

I began working material about this show into my stand up act. The Toddlers and Tiaras segment of my act is by far my favorite set of jokes to perform. It’s definitely a little on the mean side, but then again, putting your four year old in high heels, waxing their eye brows, and cramming on fake teeth doesn’t inspire sympathy.

Everyone who has seen T&T is thinking the same thing: what are these parents thinking?! And with all the money they are spending on pageants, will they have any left for the therapy that is going to be vitally necessary for these kids to function normally?

One day my friend and “comedy mentor” Kerri called me. (www.kerripom.com, go say hi. Tell her I sent you.)

“Hey, I’m about to be your best friend,” she said. “There’s someone here who wants to speak with you.”

This someone happened to be the executive producer of Toddlers and Tiaras, who Kerri knew through a mom’s group. She told her about my stand up, and had her give me a call. I was pretty excited. We talked about the show and I asked about some of the behind-the-scenes stuff. She said she can sleep at night knowing she was exposing these moms. I’m pretty sure I said something extremely corny at some point like, “you’re my hero.”

After the phone call, we kept in touch every so often via e-mail, usually discussing the show. She gave me an advance copy of an unaired episode, which has joined the ranks of my Molly Leg and Fantastic Four Arm as my most prized possessions.

Then came the really, really exciting part. Kerri, once again, became my best friend when she suggested to that they have “take your favorite comedian to work day.”

The thought of getting to see an actual pageant and see how they shoot the show thrilled me. We kept in touch, and found a date that they were shooting in Texas. I had a show not far from that area the day before, so it worked out great. For me, who has been a long time fan of the show, and now built a portion of my stand up career around it, was a dream come true.

Next, on PART TWO, I will tell you about the actual pageant day. Use the time between now and that post to take a lot of deep breaths.
Posted by Kristin at 1:38 PM

those are some frustrated mamas who are living their dreams through their children.