The Bonding Power of Free Food 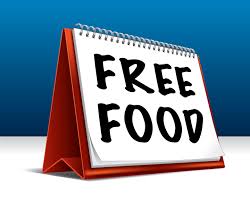 There's little in this world that makes you feel more special than receiving free food.

About five years ago two of my sisters and I took a trip to Europe.

All three of us on severe budgets, we alternated days of eating. One day we'd eat one "good" meal (meaning, we'd pay more than $5 for it), the next we'd chow down on granola bars or get a McDonald's burger for a pound, if we could find one.

We traveled to Scotland on a non-eating day.

We explored London in the morning and caught an afternoon train at King's Cross Station, arriving in Edinburgh around 7:30pm. We dumped our bags at our Travelodge and set out, tired and hungry, in the cold rain (another way to travel cheap is to go when the weather is terrible) to find a place that offered free internet and/or cheap food.

We passed a little cafe called Chocolate Soup. When the words "chocolate" and "soup" are put together to form the name of a restaurant, you have to go in and at least look.

It was small inside. I don't recall there even being tables or chairs. Just a wall of piping hot, delicious smelling soups, and a counter filled with sandwiches and some pastries. We looked at the soups and prices. Pretty cheap.

"Hello ladies," said a black guy from behind the counter in what sounded like a Jamaican accent. "How can I be helping you today?"

"I'm guessing you're not from Scotland," I said.

Of course. Cause why wouldn't there be a Jamaican dude working at a cafe called Chocolate Soup in Scotland? You go, world.

He came around from the counter and stood by me as I very Americanly lifted each soup lid to see what was inside. I picked up the smallest cup and got something that looked chowderish.

We chatted about America, the countries we'd been too, and he made a not very subtle comment about getting lost in my eyes. (Points to the Jamaican for smoothness.)

As I pulled out my bag to get money, my hands shook. A combination of cold, travel exhaustion, and low blood sugar.

"Why your hands shaking so bad?" the Jamaican in Scotland asked. Then he grabbed my hands in his. (Awkward. So very, very awkward.)

"We've been traveling all day and this is a non-eating day!" I said, my skin burning from human touch.

Then he went to the deli counter and pulled out a roast beef cream cheese sandwich and handed it to me.

"For your hands to stop shaking," he said. "For free."

--------
One afternoon, about a year or so after our epic Europe trip, I headed to Chipotle to grab lunch before work. (I still lived in LA at the time.)

If you've known me for any length of time, you'll know that I'm addicted to Chipotle. I swear they smuggle some of the ingredients over the border.

As I walked up to Chipotle there was a homeless man (at least I assumed he was homeless) outside asking people going in if they could get him some food.

People just ignored him or shook their heads, as I'd often done when I passed someone who begged. I got a little sad.

The "do unto others as you would have them do unto you..." flashed through my memory lobe. (Not sure it's called that.) Because if I were down on my luck and out of money, I'd want someone to get me Chipotle. This guy wasn't asking for money to most certainly use on drugs and alcohol. (Unless you count Chipotle as a drug.) He wanted what deep down every person wants: a burrito.

"Excuse me," he said as I approached the door. "Could you possibly get me some food?"

"Oh, just a bowl. Maybe some steak or chicken?" he said.

"Do you want to just come in and order it?" I asked before I had time to overthink it. I didn't typically do these sorts of things.

"Yes! That would be great!"

He grabbed the door for me and opened it right on my toe, scraping a little bit of the skin. I bit my lip and said thank you, glancing down just in time to watch a little blood trickle onto my flip flop. "This is going well," I thought.

How do you strike up a conversation with a homeless (again, was he even homeless? I still hadn't asked.) person you're standing in line with at your favorite restaurant?

"So...you're out of work?" Well done, Kristin. Start right off with pouring salt in the wound.

Fortunately he was neither annoyed nor offended.

"Yes. Construction. Terrible business right now. They just don't have any work. No one's building in this economy."

I asked about his family. His boys were both grown, he said. That was that.

We talked about some other things. The city. Jesus. Show business. I invited him to one of my comedy shows that was close by. He said he'd try and make it.

He got a bowl with rice, steak, and "three big scoops of sour cream, please."

I paid for our food, he thanked me, we shook hands.

I went to my car and watched as he clutched his bag and crossed the street. I stayed there till he was out of sight. I instantly regretted that I hadn't asked if he wanted to sit down and eat inside.

Because through everything, in my nervousness of stepping out of my comfort zone and trying not to say the "wrong" thing, I forgot to ask him if he was homeless.

-----
I'm not sure the moral of these stories, except to appreciate free food when you receive it, and to give free food to someone you otherwise wouldn't have anything in common with.

Because at the end of the day, we all need to eat. Why not make it a little special?
Posted by Kristin at 11:27 PM No comments: