Comedy and the art of Fear Maintenance

Someone after my show today told me they love comedy, but weren't brave enough to try it.

I have a myriad of fears related to comedy and writing. They include, but are not limited to, the following:

I've heard people give huge spiels about how they got over their fears and live free of any hesitation or trepidation. (Always remember that as Christians, all our struggles must be past tense. We're not allowed to have any current ones...at least not if we're reading our Bibles and having TWTL on a daily basis. Apparently.) So I must be doing something wrong if I'm still afraid and I'm doing the very thing I'm afraid of. Wait, does that even make sense?

I continue doing comedy, not because I'm terribly gifted, but because I love it. I love it even when I'm not the one doing it. I love watching comedy, reading comedy, reading about comedy (yes, those are two different things), talking about the philosophy behind comedy, and being around funny people. Writing and performing comedy seemed the logical next step in my obsession with laughter. I'm privileged to get to do it on any level, and still can't believe some of the opportunities I've been given through my "out of control hobby."

Success looks different for everyone. (And yes, I'm aware that's probably what people say when they're failing.) I figure as long as I'm having fun and people are laughing, I must be succeeding. So, my fears and I will continue on with this incredibly random, sometimes sleep depriving journey. With that, I'm going to bed.

If you're reading this, it means I mustered up the courage to press the "Publish" button.

So, am I the only one who struggles with fear in what they're already doing? Bueller? Bueller?
Posted by Kristin at 8:40 PM 1 comment:

I've been a little silent on blogs lately, mostly because I've been working on a book that's due at the end of this month. What's that you say? A book?! Yes, I think I can finally announce that I signed a publishing contract with Barbour Publishing. (It feels surreal to even type that.) Anyhow, because of the whole book-publishing process I've been evaluating my social media status, as authors are expected to maintain an "online presence."

There are several reasons for this:

1. I am lazy. (It's okay to confess struggles online, right? People are pretty understanding and supportive when you put anonymity and free speech into their hands? Great.)
Figuring out each site takes time. And it's time I'd prefer to spend rotting my brain on Hulu or playing outside with my ducks. (Oh, yeah. I had a momentary lapse in will power and got pet ducks. More on that another time.)

I also know that if I did get on all these sites, I'd be hopelessly addicted and waste even more time. So in this case I feel like my tendencies toward laziness and addiction are canceling each other out. It's your classic case of two negatives equaling a positive. I think that's how that math concept worked...

2. I am technologically stupid.
The only social media outlet I'm decent at navigating is Facebook (@Kristin.weber1) and I recently learned that it's no longer cool cause we're all switching to snappier sites that require even less of an attention span.

I'm on Twitter (@Kristinweb), but we're not doing so great. I don't know how to add emojis, I just today figured out what a hashtag actually does, and I really want to know how I can get two pictures next to each other so I can participate in things like Transformation Tuesday. (Although mostly I think we're just making up excuses to post pictures of ourselves in ways that don't seem too narcissistic.)

3. I don't have the hardware for it.
iStill don't have an iPhone, which is part of the problem. Although I did recently upgrade from a flip-phone to a slide-out phone, so when people start getting cell chips implanted in their brains for communication, I'll probably be ready to try an iPhone 3 or something. A random stranger in the airport asked if I was trying to make a statement with my flip phone. The statement is simple: I can't afford it. I gotta keep my debt snowball moving. (Dave Ramsey reference, FTW!)

I am making some progress. I got iPad recently and with it, Instagram. (@writerkristin, though just as a heads up I've mostly posted an obnoxious amount of pictures of my ducks.) I've really enjoyed seeing the endless stream of selfies, pictures of legs outstretched with a book, and gourmet dinners. Maybe someday someone will invite me over to share one of those meals, but until then, I get to live vicariously and look at their photo while eating a peanut butter and Nutella sandwich for the 15th night in a row.

I'll make a great old person, but until then, I'll just have to accept that I'm a little behind the times.

How do you keep up with social media? Do you have any tips for me?

Oh, and here's a picture of Frances the Duck. (Yes, his hair is natural.) 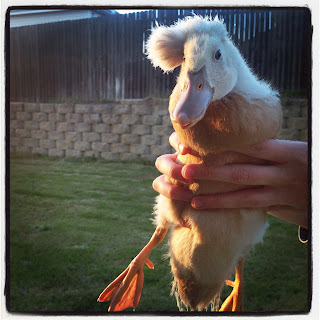 kristinweberonline.com
Posted by Kristin at 9:32 PM No comments: