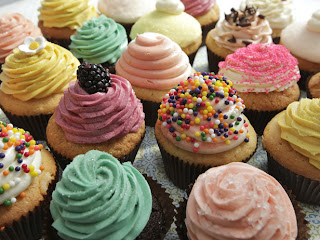 A couple years ago cupcakes started trending. If my cupcake history is correct, the Beverly Hills Sprinkles launched these little delicacies into the spotlight, and the fire gradually spread. Cupcakeries (if it's not already a word, it should be) began popping up all over the place.
It is my firm belief that cupcakes promote happiness.** Have you ever seen a cupcake and frowned?
As the trend spiraled nation-wide, I had an overwhelming urge to find the world's most perfect cupcake. This quest would require dedication, commitment, and the consumption of a lot of cupcakes. But it was a sacrifice I was willing to make for the betterment of mankind. After all, can you imagine the power you'll hold if you possess the knowledge of where to find the most perfect cupcake? I shudder at the thought of this knowledge falling into the wrong hands.
I began sampling cupcakes at a rate of one a week. When I was on the road with comedy I'd keep my eyes open for bakeries to try. Over the course of 2011 I established my top three picks for cupcake places in the U.S. Two are in California, one in Texas. This year I will continue my quest to find the perfect cupcake...if such a thing exists.
Last thing: I am among those with an innate disgust of the word "moist." But there is truly no other word that adequately describes a bakery product with the appropriate amount of moisture. My synonym search yielded alternatives like "oozy" and "damp." Certainly not an adjective I want describing something I'm eating, unless it's frosting oozing out of the cupcake. Even then...kinda ew.
And finally: My Top Three Cupcake Picks for 2011:
1. Sift in Napa, CA
This place won Cupcake Wars, and for good reason. I tried the Sky is Falling and Snickerdoodle cupcakes, which were hands down the best cupcakes I've ever tried. They were moist, with the appropriate cake-to-frosting ratio. The flavors just strong enough without being overwhelming.
2. NV Cupcakes in Corinth, TX
Usually bigger cities boast winning treats, but this unassuming little shop nestled next to an Alberton's boasts some pretty spectacular treats. The thing I value about these is the consistency. These are near my family in Texas and I often get them as gifts. They are never dry, never too sweet, and slightly smaller (also priced lower than the average cupcake) so you don't go into a sugar coma after eating one. My personal favorites are the New York Cheescake (available on Fridays) and the York Peppermint (rolled out on Wednesdays). Bonus, it's family owned.
3. Famous Cupcakes in Valley Village, CA
This cupcakery was in a neighborhood where I used to teach. The cupcakes are moist, and the frosting brilliant. Start off with a half, though, as they are quite sweet. I recommend the Black Tie or Vanilla. The biggest con is trying to find parking in the tiny shopping center where this is located.
Honorable Mention: WalMart cupcakes. You wouldn't think the place known for cheapness would crank out a decent pastry. Perhaps it was because my expectations were so low I had no choice but to be pleasantly surprised.
www.funnykristin.com
*When eaten in moderation. Eaten in large quantities they promote type 2 diabetes. This PSA brought to you by Paula Dean.**
**PSA not actually brought to you by Paula Dean.
Posted by Kristin at 4:05 PM No comments: