There's a Man in my Pants! 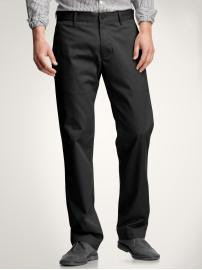 A few months ago I received the most amazing advice on how to get a husband. After one of my shows a middle age lady came up to me and posed the following question:

"I know you joke about being single in your act, but is getting married something you want?"

"Sure, when I meet the right guy," I responded.

"No," she said firmly. "If you're serious about wanting to get a husband, here's what you need to do. You need to get a pair of men's pants and hang them on the end of your bed. Then you pray to God every night to fill those pants with the perfect man."

I almost started laughing, but there was no hint of joking in her voice.

Oh my, I realized. She's serious! And she wasn't finished.

"But you're tall," she added thoughtfully. "So you want to hang a big pair of pants so you get a tall man."

"My dad is tall," I interjected. "Can I just use a pair of his pants?"

Good! I was wondering where the bar for "weird" was. It definitely had been raised in this conversation. And she still wasn't finished.

"Go to Goodwill and pick up a pair of pants there," she finished.

"I don't want a used man!" I thought to myself. My thoughts were interrupted, though, as she continued talking.

"That's what I did when I was ready to get married. I hung those pants up, prayed, and then I joined Christian Mingle and found my husband!"

There were so many crazy wise cracks going through my head. I got the sense this wasn't the kind of person who would take teasing. (It's much less rude, and requires less of a spine, to blog about it later.) Instead I smiled and said, "thank you for the advice."

"Please let me know how it goes!" she said.

"I will be sure to let you know when I have a man in my pants," I said. Oops. It didn't sound like that in my head.

Later I relayed the whole thing to my friend who was with me. We decided I shouldn't rush into hanging just any pair of pants. Based on this logic, the kind of pants I hang will be indicative of the man who fills them.

Did I want to hang scrubs and get a doctor? Designer pants and get a lawyer or businessman? If I hung up an Ironman suit would I get Robert Downey Jr.?

I haven't hung the pants, but that conversation did get me thinking about starting a new dating website. I will call it Maninmypants.com. I am too scared to google it to see if it's taken.

What crazy advice have you received for finding a spouse? And, did it work?

www.funnykristin.com
Posted by Kristin at 12:00 AM 8 comments: