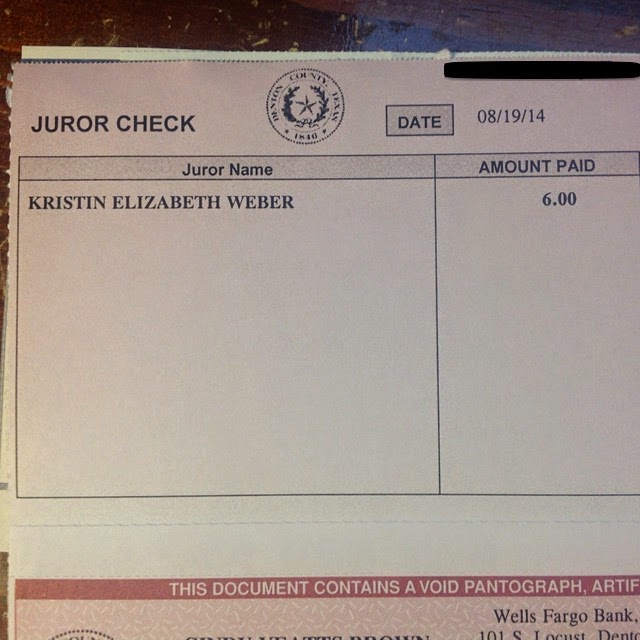 Earlier this month I got extorted by my local government into showing up for jury duty. My lack of luck at getting drawn for things finally had a positive side and I didn't get picked for a jury. Today I received this beautiful souvenir in the mail commemorating the time I spent sitting in a room full of people holding my breath.

Even though $6 is mere pittance in this economy, I decided I should still steward it well. So I ran my good citizen earnings through a Dave Ramsey budget recommendation pie chart. This is how I'll be spending my $6.

$1.8 will go toward my housing. My parents will really appreciate getting rent from me this month.
$1.2 will go directly to food. I will enjoy feasting on one child size Chipotle taco.
$.60 will go toward my car. Pretty sure I can get a couple tablespoons of gas.
$.60 will go to getting clothes, but if I shop at Goodwill that's an entire outfit.
$.30 will go to my medical bills. Finally get a bandaid and protect this nasty hangnail from tearing.
$.18 will go toward insurance. Or in this case, reassuring me that I will never be fully assured of insurance.
$.06 to further my education. Perhaps I'll buy a Laffy Taffy and study the joke on it.
$.60 to my credit cards and loans. Sally Mae will be so proud.
$.18 into my savings account, aka the toilet shaped mug sitting on my desk.
$.18 will go toward entertainment. I'll probably just get 18 pennies and look for one with my birth year on it. That was fun as a kid.
$.30 will go to charity. I need to pray about which one I should bless with my abundance.

The good news is I'm off the hook for jury duty for three more years, and I can go get a Smashburger. (But just the burger. If I want cheese and the other trimmings I gotta wait until I get jury duty again.)
Posted by Kristin at 8:06 PM 3 comments:

Scuba Diving and the Art of Ego Maintenance

But humans are not deterred by such physical limitations. We will go to outer space. We will push that oversized bag into the overhead bin to avoid paying $25 extra dollars. And we will find a way to breathe underwater.

During my junior year of college I took an open water scuba certification class as one of my electives. My chubby, socially awkward self thought it looked adventurous.

I went to school in Dallas. If you look at a map you'll quickly realize it's not a popular dive destination. We're landlocked with a handful of muddy man-made lakes scattered about. My "adventurous" dive training equated to sitting in at the bottom of the campus pool in full scuba gear and then rushing to logic class dripping wet. Our scuba certification dives were completed in a glorified pond created specifically for diver training. The only marine life were two catfish that swam around us. But if you squinted they kind of looked like small, sad sharks.

Last year I went diving for the first time in the ocean while on a Caribbean cruise. It was like entering an alternate universe. I don't know why Ariel would ever leave that world to be part of ours. Singing fool. Aside from some buoyancy issues, jelly fish encounters, and the general fear I'd lose my group if I turned around to look at some coral, it was great.


This year two of my sisters and I decided to take a couple weeks and go to Honduras to further our dive training. Already advanced divers, my sisters went on to complete a rescue diver course, and I went off all by myself to an advanced course.

Most of our time was spent on Utila, the smallest bay island off the coast of Honduras. Utila is unlike anywhere else in the world. This 7x2.5 mile island marches to a rhythm all its own, and I absolutely loved the culture and vibrancy.

I met people from at least ten different countries. My dive instructor was from Spain. (I really wanted to ask her or her husband to say "Hello, my name is Inigo Montoya. You killed my father. Prepare to die." But my siblings said that was racist. I don't think it's racist. Incredibly tacky, yes. But not racist.)
I talked with a lady whose great grandmother was one of the original Islanders. She herself grew up there and left only a handful of times.
One of my dive buddies was a former Israeli solder. (My brilliant plan for us in case of a shark attack: I'd distract it with a joke and he could take it out with Krav Maga.)

It had been almost ten full years since I'd had any dive training and I had a lot to learn. I'm naturally gifted at nothing and while I eventually catch on, it just takes me a little longer and makes my pride a little sore. What I lack in natural capability, though, I make up for in resilience and sheer determination.

(A/N: I'm about to launch into scuba jargon. I will try and explain as I go, but you really should go get scuba certified so you can a) understand the language and b) know what raw happiness feels like.)

A few things I learned during my advanced course:

Nitrogen narcosis: At deeper depths some divers can experience a thing called "nitrogen narcosis," where the nitrogen and pressure give a narcotic/drunken effect. I'm a little slow as it is, so that didn't change much. My nitrogen narcosis manifested in the form of feeling very happy. I could've been dismembered by a shark at 100 feet and felt nothing but joy and exhilaration.

Metric: Apparently everywhere except the U.S. adheres to the metric system. Meters, kilometers, centigrade, I had no idea what was happening. My brain hurt from converting constantly. (Okay, fine. It wasn't that bad. I'm just lazy and bad at math.)

Night dives:  This was by far my toughest dive. I had two diving fears: night dives and diving in enclosed spaces. I was determined to conquer them. My shining moment of the trip came during our pre-dive briefing. Our instructor told us we'd have flashlights. I was nervous and distracted and I meant to ask how big and bright the flashlights would be. What came out was: "will we be able to see with the flashlights?" Everyone at our table just stared, and that's when I coined the term "surface narcosis"--being stupid without the help of anything at all.

Diving is addicting. Really, really addicting. I can understand why the diving community in North Texas dug a hole specifically for diving. I'm already planning my next trip. I may even take our relationship to the next level and invest in a mask. And perhaps go back and become a rescue diver. And who knows, maybe I'll even become a divemaster one day.

I'll have to work on my navigational skills, though. Cause right now if I led a dive we'd start in Honduras and end in Thailand.

If you made it this far, please enjoy these pictures: