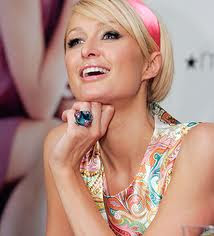 While reading through some news I saw that Paris Hilton received a $375,000 car for her birthday. I was struggling with jealousy, but then I realized she'll probably never experience the inexplicable joy of realizing you can pay all your bills this month and still have $3 left over.

Also, while just doing some editing it came to my attention that the word just has just become a new "filler" word. Like like like used to be in the late 90s. (You'll have to say that last sentence several times aloud to get the appropriate inflection right and just like know what I mean.)

That's it. Have a good evening!
Posted by Kristin at 7:52 PM No comments:

True Love, as demonstrated by my parents 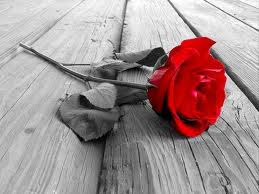 I was over at my parents' house the other day, enjoying some chicken nuggets and juice at the kitchen table. As I reconnected with my inner seven year old, my mom and dad came into the kitchen. My parents, who learned to tune out the presence of their children long ago, didn't notice me, and I witnessed a conversation demonstrating the true, deep love shared between them.

"Marge, for Valentine's Day I'm going to download a picture of a rose for you, okay?" my dad said.

"Ok. That's fine. I just hope you know how good you've got it," replied my mom.

"Well, you realize how good you've got it, right?"

"So it's ok that I don't get you anything else for Valentine's Day?"

To my future husband: if I'm romantically challenged, blame your in-laws.

www.funnykristin.com
Posted by Kristin at 4:45 PM No comments:

There are ten things you will never (or at least very rarely) hear a homeschooler say.

2. Lindsey Lohan is my role model.

7. It takes too long to get to school!

9. It is very important to me that my socks match the rest of my clothes.

So, what else would you rarely hear a homeschooler say? Feel free to chime in!!! =)
Posted by Kristin at 11:21 AM 7 comments:

Email ThisBlogThis!Share to TwitterShare to FacebookShare to Pinterest
Labels: homeschool 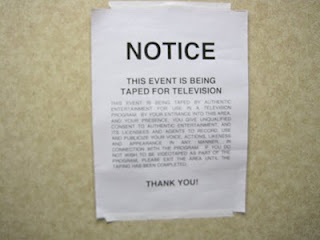 I came straight to the T&T pageant from a show in Houston. Lori, my trusty sister and travel buddy kindly drove so I could sleep. I had a full-blown sinus infection and felt like a truck had hit me. Since I’d been traveling I hadn’t gotten to the doctor’s to get antibiotics. Lori asked if I wanted to skip it and just go home.

I pumped myself full of drugs and stuffed my pockets with Kleenexes. (If you look close in the audience during the episode you’ll probably see me in the background blowing my nose. Classy.)

We arrived around 11:30am and, as we walked in, passed several contestants. The “glitz” make up on a four year old is even more disturbing in person. One little girl, who couldn’t have been more than three or four, was in a skin-tight two-piece leopard print outfit, giant hair piece, and 10 pounds of makeup.

We went inside and checked in with the crew, and I met with the field producer I’d been instructed to find. The FP told me she was going to get an interview with me. I didn’t know they were planning to have me on camera…as was evident by the lack of effort I’d put into my personal appearance. They asked about my stand up, what I liked about pageant shows, and what I was expecting from the pageant. The crew was very nice and fun. I also enjoyed seeing how they shape the interviews.

(Hanging out waiting to do my interview) 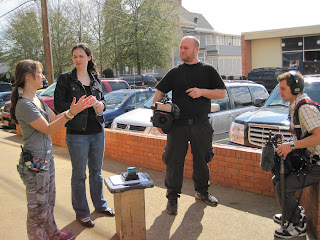 (Doing my interview. I felt legit.) 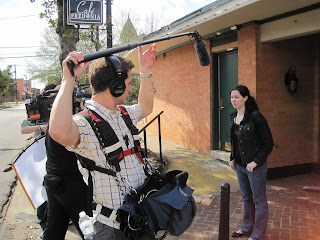 After my interview Lori and I went in and watched the pageant. When filming, the T&T crew requires anyone who watches the pageant to sign a release saying it's ok to show their face. We signed our releases and found our seats. There were three categories to this pageant: beauty, outfit of choice (or, more accurately, your pageant mother’s choice), and American wear.

American wear was by far the most entertaining/appalling. We watched little girls perform strip tease-esque routines wearing a variety of skimpy outfits in patriotic colors and camo.

The best (and by best, I mean “most shocking”) was a little girl who came up wearing camo fatigues and did a hip hop dance to Soulja Boy. The music then stopped, she shouted, “We salute the troops!” (I can’t remember exactly what she said…but it was something like that.) She then ripped off the camo to reveal a skin-tight skimpy red-white-blue outfit, the music changed to Miley Cyrus’ Party in the USA, and she finished her routine shaking it to that.

I’m not sure who was working it more: the kids or the moms doing the routine for their kids behind the judges. For some it looked like the most exercise they got in a while. (Sorry…too mean?)

Here’s what I didn’t realize from watching T&T: pretty much every contestant gets some sort of prize/title. In some age groups there were only two girls. So…where is the actual competition? Well, the true winner is the person who wins the “Ultimate Grand Supreme.” That is the real winner. The rest are fake winners.

(What everyone was competing for) 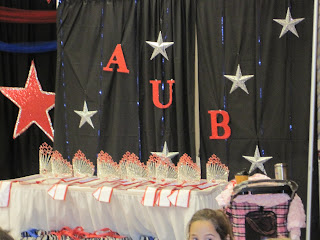 There was so much more, and I am working on incorporating more of this field trip into my stand up. But to summarize, here are the most important lessons I learned from this pageant:

1. Candy is an excellent reward for both good AND bad behavior.
2. If you want to fit in and encourage a competitor, shout: “get it, girl!” Preferably at least a dozen times per minute. If you get sick of shouting that, switch to: “sparkle, baby!”
3. It is okay to strip as long as you are doing it to honor our soldiers.
4. A fall, spray tan, and access to a sequin gun will greatly enhance your natural look.

That's it! Remember to watch Toddlers & Tiaras on Wednesday nights @ 10/9c on TLC! You won't be able to stop!
Posted by Kristin at 9:31 PM 3 comments: