**Warning: This post is longer than all three Hobbit films combined.**

One of my sister's friends kindly dropped me off at the bus stop in downtown Atlanta. Things got weird quick. There was no station, no indoor waiting area, no desk or information person available; just an awning with a lot of disgruntled bus passengers and homeless people trying to stay out of the rain. The bus departing prior to ours still hadn't shown up and was now two hours late. The one representative present for our bus line didn't know what was going on and was trying to manage the chaos.

I stood on the corner, attempting to avoid the gaggle, and then quickly realized standing on a corner in downtown Atlanta wasn't the greatest idea. (Come on people, can't you tell the difference between an "escort" and a severely caucasion woman waiting for a bus?!) After several stares and comments I walked across the street to a restaurant until closer to my bus's departure.

I returned and there had been no change in the situation. The earlier bus still hadn't shown up and now our bus was also officially delayed. Heads hung in defeat, curses were spewed into phones at faceless customer service agents, and homeless people wandered up the line trying to sell us things they'd pulled out of trash cans.

I found some space on a concrete wall under the awning and sat down. A few minutes later a girl in her early twenties sat next to me and tried to strike up a conversation.

I'd woken up with a throbbing head and sore throat that were getting worse as the day went on, so I wasn't super eager to talk to anyone, sane or not.

This young lady, however, was determined we'd be friends and kept talking. As we waited together, avoiding eye contact with crazies, we chatted. She was heading to Jacksonville to visit her family for Christmas. She told me about her job and her school and how she'd rushed to the station and hadn't had time to eat. By this point it was clear our bus was at least an hour off, so I suggested we go back across the street to the restaurant.

She told me about her childhood in Brooklyn and gave me some tips for deterring crazy hobos. (No eye contact, don't say anything unless they touch you, then scream.)

She asked if we could sit together on the bus. I told her yes. By this point it felt like I'd known her my whole life. I could barely remember a time when I wasn't waiting for this bus.

"The bus is broken," she said. "They're sending charter buses instead."

"Excuse me," said a woman from the line. "I just got off the phone with customer service and they're saying our bus already left and is on its way to Florida...but we're still standing here!"

Another 15 minutes passed. My cold meds were wearing off and I started feeling sicker. I looked at my phone. The battery was getting low and I had nowhere to recharge. The restaurants that had provided a temporary haven were now closed for Christmas.

My young friend was also now on the phone with customer service. Based on her tone the conversation wasn't going well. The bus line representative walked by shaking her head.

"Sorry folks, they said they were sending buses but now I don't know," she lamented. "They're not telling me anything."

Curses and groans rippled through the line.

I texted my sister in Florida and told her I didn't think it was going to work out to spend Christmas with them. She texted back a sad face and a plea to wait a little longer.

I called Lori (the sister who lives in Atlanta) and explained the situation. She needed to leave for work soon (she works the night shift and had been sleeping all day) and if she was going to pick me up it needed to be sooner rather than later. She told me to go down to the nearest MARTA station (Atlanta's subway system) and take the north line to the end. She'd meet me there.

I tapped my friend's shoulder, feeling a bit like I was deserting a fellow soldier, and told her I was bailing.

"Yes, I'll be fine," she said, giving me a quick hug, and then returning to her heated conversation with the bus line's customer service.

I grabbed my bags and rushed to the MARTA station, my wheelie suitcase thudding dramatically on the stairs as I hurriedly descended below street level.

I got to the subway platform and was the only one on there. After the chaos of the bus stop, the silence felt oppressing.

Standing alone on a subway platform is like shaking hands with an existentialist. You feel the weight of aloneness. Raw, gut wrenching, chest-constricting loneliness.

As I stood there, not a soul in sight, tears filled my eyes and I did something I don't do often: I cried.

I cried for the weary travelers who were putting up with a horrible bus line simply so they could see a familiar face on Christmas. I cried for the bus representative, who was getting lashed out at for things outside her control. I cried cause I felt like I was letting my little sister and my new friend down. I cried for the family of a friend who abruptly ended her own life a few months ago. I cried for my friends who were raising their babies without a spouse. I cried for my own heart, which was filled with so much bitterness and selfishness this week. I cried because I'm really good at being alone and I don't want to be good at that anymore. I just cried.

My train came and I got on, my face all blotchy and tear stained. A homeless person moved to get away from me.

Unlike the passengers waiting for the bus, whose faces were filled with loneliness, anger and desperation, the few passengers on the subway had no expression at all. Disaffected apathy filled the car. These people probably weren't even aware it was the day before Christmas.

I rode the subway as far north as it went and walked out to meet my sister. She was already in her scrubs, ready for another night of delivering babies.

"If you're willing to drive me to work and drop me off after, we can go to the 5pm Christmas Eve service," she said.

Exhausted, my head pounding and my throat stabbing more with every swallow, I nodded.

I was determined to redeem this day, and to expose as many people as possible to whatever bug I was fighting.

We sat in the very back row, singing carols and listening to the pastor's reminder of the incredible event we're celebrating. God lowering Himself to become a man for us. A man who would experience hurt, rejection, betrayal and loneliness. Jesus was the Word. Without words humans can't communicate. They can't know one another without words, just like we can't know God without the Word.

I closed my eyes, partly to dull my growing headache, but also to savor the words. Jesus is Hope. Hope for everything I'd cried for on the subway platform. Hope for the rest of today, and all of tomorrow.

I'll be spending Christmas alone in my sister's apartment with a virus. Part of me is excited for a calm, quiet day. Because as I said before, I'm good at being alone.

If you're awake and struggling this Christmas Eve, please please email/text/message me any prayer requests. I'd love to pray for you. (Even if it's that you need to forget a ridiculously long and purposeless blog you just read.)

Merry Christmas, friends. We have hope!
Posted by Kristin at 7:41 PM 5 comments:

Six months ago I packed up everything I owned and moved to Colorado Springs.

First, I've driven in snow. This was my biggest fear moving to a colder climate, but I'm adjusting to not always being entirely in control of my car. Last night we had a snowstorm and this morning I slipped and slid my way to church. While making a turn I skidded slightly and managed to recover without panicking, at which point I yelled "did you see that?!" to my accordion, which was in the passenger's seat. (He's old enough to sit up front now.)

The key to driving in snow is to go slow. Not only does this prevent accidents, it gives you time to laugh at the sports cars, which aren't nearly as cool when they're fishtailing on a sheet of ice.

The second milestone is I'm playing accordion in my church's praise and worship team. The stage is a little small so they have me play in a portable building on the other side of the parking lot, but I'm loving it!

The biggest milestone happened in August, when I purchased my first piece of furniture. This was a bittersweet moment, and one that required a good amount of thought and prayer. I've always been able to fit everything own into my car, and purchasing this furniture piece meant giving up the freedom and independence that comes with not owning large things. Now if I want to move anywhere I'm going to have to bribe a truck owner with pizza to come transport my IKEA bed frame. (Fortunately I can deflate and easily transport the air mattress that I have on the bed frame. Baby steps.)

Or, I could just cut my losses and buy another $99 bed frame when I make it to my final destination. (This is assuming I'll move again, which right now I have no plans of ever leaving Colorado Springs.)

Life in Colorado has been beautiful. This new season has been calm, and I'm grateful. I've spent time sitting with friends over coffee, hiking mountains with my sister, making late-night Wal Mart runs with roommates, reading books, and mentally rejuvenating. I moved here worn out and jobless, and God's provided both rest and work. (Lovely irony.) I don't know what's up next, but I'm trying not to take this peace for granted. 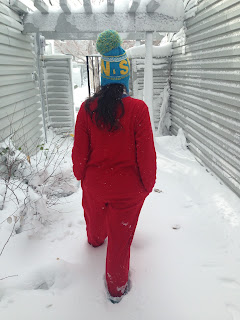 In a Winter Wonderland. 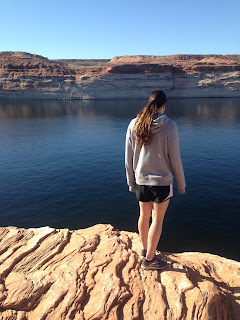 My youngest sister Leah at Lake Powell (left) and The Grand Canyon (right): Two of the stops on our Thanksgiving Road Trip Spectacular.


Tonight I'll turn in the final draft for my next book, tomorrow I'll play Simon Cowell at callbacks for a show I'm music directing in the new year, and then Tuesday and Wednesday I'll be speaking at a school here in Colorado Springs. Wednesday evening I'll log out of my social media, shut down my computer, put on my sweats, and head out on a "Christmas Family Tour," where I'll visit my parents and siblings in their various states.

Merry Christmas, friends, and may 2016 bless you in ways you didn't believe possible.