I've been equal parts hesitant and curious about online dating. On the one hand, online dating seems like a great way to connect like-minded people whose circles might otherwise never cross. On the other hand, strangers!

Both of my roommates here in Colorado do/did online dating and after hearing their stories I decided to give it a try. Also--my younger sister and I thought this would be a hilarious profile picture: 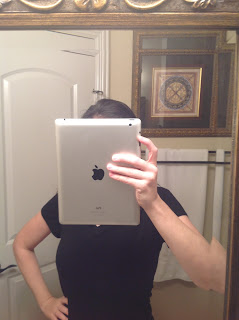 I decided to go with eHarmony. Why eHarmony? Because it's the only site where I personally know several married couples who met there. (If you know me and you met your spouse through another online site, please feel free to let me know.) If I were to go with a site purely on name value, I would've gone with Ugly Schmucks or Plenty of Fish. (The latter is incredibly aptly named, as dating in general feels like a fishing expedition.)

Putting together an online profile is essentially like putting a house on the market--except you're marketing yourself. You gloss over the bad, cram your weaknesses in a drawer, and highlight your intellect, athleticism, and wit. People should also know you've been recently painted and are in a good school district.

We spend hours putting final touches to make ourselves marketable all while having a long list of requirements in any potential mate. It's all about you being the perfect fit for me. (And yet at the same time we're terrified we're not going to be wanted by anyone if they truly know us.) If you're not perfect--say, for example, your favorite outdoor activity is rock climbing and mine is croquet--then I have a whole profile queue filled with other options that might be tailored more toward my interests. It's basically a relationship food court. You can get a feel for what's available, and if you don't like any of them you can go elsewhere. (But why would you leave a food court?! Are you too good for Hot Dog on a Stick?!) In the end, we end up looking for the male or female version of ourselves. Because, after all, I know I'm perfect for myself.

I was 12-hours into online dating when I decided it wouldn't be my cup of tea, at least for now. When I called to cancel my trial the eHarmony operator asked why.

The operator asked if I was unhappy with my matches.

"Yeah--none of them are Robert Downey Jr," I joked.

She graciously extended my free trial to two weeks so I could warm up to the idea of online dating.

I want to create a dating site where we put all our negative traits out in the open. If after reading them someone's like, "yeah, I could live with that," then they get to see all the positives.

If people know I'm lazy, cynical, burp too loud at all the wrong times, can't eat tomatoes without gagging, possess a set of smelly feet, completely lack confidence, overkill sarcasm, fidget constantly, am in a common law marriage with Chipotle, am incredibly indecisive about every decision that doesn't involve eating at Chipotle, and are still like, "sure, let's move forward," then maybe it'll work.

(Exhibit B: I changed my profile picture 24-hours in. Men should know they'll be competing with a burrito chain for my heart.) 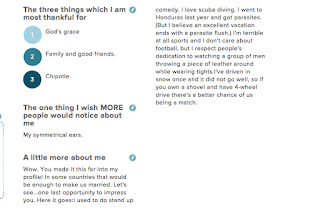 I'm eager to read Aziz Ansari's new book Modern Romance. I'm currently number 457 on my library's wait list to read that book, so it seems I'm not the only one frustrated by consumer dating.
Posted by Kristin at 6:05 PM 5 comments: