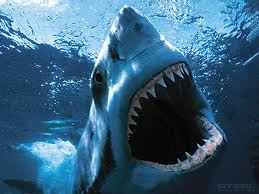 I am already counting down the weeks until this years' Shark Week. It always falls the week of my birthday, and an entire seven days chock full of shark documentaries is the BEST birthday gift ever.

Since I'm not doing as much traveling in the coming months, I treated myself to a Netflix account. Right now I'm going through and watching all the old Shark Week episodes that are streaming.

My favorite episode so far is "How not to Become Shark Bait." It seems obvious to me: don't get in the water. But, that's not their advice. Rather than test for normal scenarios, they put themselves in situations 99% if swimmers will never get into. I would like to know whether you should swim if you have a cut, or whether it's smart to wear a wetsuit cause it makes you look like a seal.

But, when was the last time you thought to yourself, "golly, I'd like to wear my clown suit swimming, but I'm afraid it will attract more sharks!" Uh, never.

Now I'm watching Air Jaws: Sharks of South Africa. Essentially, a shark jumps out of the water, then they cut to a "shark expert," who comments. Rinse and repeat.

www.funnykristin.com
Posted by Kristin at 9:01 PM